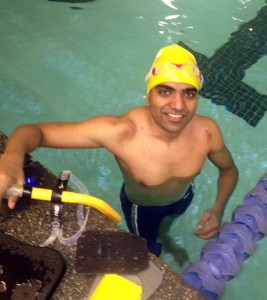 Himanshu Kale joined Seattle Athletic Club at the end of July 2012. His goal: to complete a half Iron Man triathlon; his obstacle: he could barely swim! When we met that week for an initial complementary swim assessment, I found he had a lot of anxiety around the water. Like many with water anxieties, Himanshu did not trust that he could put is face and head in the water. However, I soon found that Himanshu had a lot more willingness to work through his fears and anxieties in order to achieve his goals. He was ready and willing to learn the fundamentals first: to start from the most elementary and foundational place: putting his face in the water practicing blowing air out of his body. Beginning with learning to breathe properly and gradually adding one technique on at a time, Himanshu has developed a technically strong freestyle stroke.

Many people who never learned to swim develop a fear and anxieties around the water simply because they’ve never been in it, making learning more challenging. Others have experienced traumatic events, leaving them with emotional scares of swimming. For all these people, learning to swim is such an act of courage. When they commit to this skill, however, the reward is a life changing shift in their entire perspective of their place in the world. Himanshu took on this challenge.

In November he ran his first half marathon. In December he started working out in my Swim Conditioning class and soon joined TN Multi Sports! There he is able to work on his conditioning and prepare for his first triathlons.

Now, when Himanshu and I meet, we focus on continuing to improve his technique, learn the other strokes and turns, and continue to work through any lingering fears that come up as we introduce new dimensions to his swimming repertoire.

Himanshu’s success is remarkable especially in such a relatively short period of time. I am honored to work with him and look forward to watching him reach his ultimate goal of completing a half Iron Man in June 2012.

Working with Himanshu has been an honor, making me especially proud.

Next
Just How “Full Body” is Rowing Really?