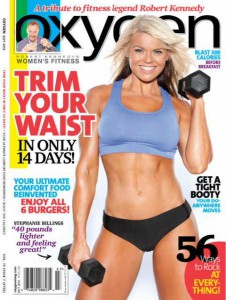 The Seattle Athletic Club would like to introduce its newest health professional to our team; IFBB professional figure athlete Stephanie Billings. Stephanie Billing’s warm face and welcoming demeanor will be at many of our fitness events lending a helping hand and using her education to answer many of your wellness questions. Here is some background information on Stephanie and how she came into the health and fitness industry:

With the dream of becoming an IFBB Professional Figure Athlete, I stepped on stage for the first time in 2007. Little did I know that three competitive seasons and ten shows later, my dream would become reality.

Growing up, I was raised in a football centered home, my dad and both my older and younger brother. Playing sports and lifting weights was a staple in our lives. I could not wait until I was old enough to workout at the YMCA with the rest of my family. We have photos of us flexing our arms and now, as adults, we still flex for one another! As an active family we not only lifted heavy, but they also ate heavy! All my life I have struggled with my weight and body image. These issued have plagued me my entire life… even at the age of 5 on the t-ball field; I had to make sure I had a bow in my hair! Growing up I played baseball, basketball and anything that would contain my competitive spirit (and showing that I was just as tough as my two brothers!), however, it was cheerleading that stuck with me from third grade until I graduated high school. This too added to my lack of confidence since I was not the ‘typical size’ of a cheerleader. Although beneficial for my current endeavors, my broad shoulders and long legs were not conducive to cheering in college, and no matter how hard I worked and no matter what titles I received, a 5’7” cheerleader is not on the top of a recruiter’s list. So I hung up my pom poms and conformed to the “college” lifestyle. Processed food, alcohol and lack of exercise followed suit and the inevitable happened, I had become a societal stereotype.

In January of 2005, I saw myself in a music video, put together by one of my former college classmates, and was completely faced with a true picture of my physical self: 180-pounds and 30 percent body fat. The person I saw on the screen could not possibly be me! It was at that moment I knew it was time for a complete lifestyle change; I bought a treadmill, a dry erase board, diet log and got to work. At that time, I knew little about diet and exercise but enough to know I had to burn more then I consumed in order to start losing weight. I immediately started educating myself about nutrition and what it would take to maintain muscle, while burning fat. Eight months later I had lost over forty pounds through hard work, a healthier diet and a new outlook on life.

Later that fall, I went to a body building competition to watch one of my friends compete. As the girls lined up on stage something clicked! This was what I wanted to do! At that moment I had an epiphany. I saw myself on stage, in the jeweled suit and clear 4-inch heels, reveling in the stage lights and listening to the onlooker’s cheers. Plans were immediately put into action to step on stage. Four months later at my first show my life changed forever, I became a figure competitor.

After the development of my new lifestyle I decided to pursue a health centered career. I completed my BA in public relations & marketing from the Western Kentucky University and knew that healthcare was a perfect fit for me. Working full time, ongoing competition prep & a full-time post graduate workload, I completed my Masters in Public Health (MPH) and Masters in Health Care Administration (MHA).

My MPH thesis, “Obesity Epidemic through a Childs Eyes”, dealt with elementary school children’s school recreation & nutrition programs. For my MHA program I completed a one year fellowship with the Department of Veterans Affairs & accepted a permanent position after completing the curriculum.

After completing my education & beginning my career, I knew I had found my niche in competing. I found a healthy balance between work & competing. Determined to obtain professional status, I competed at the 2009 Team Universe. This was my third national show, and tenth show competing. Leading up to the show, everything felt perfect and show day, everything fell completely into place. My dream came true and I left the stage a new IFBB pro.