Electrolytes – What They Are & Why You Need Them 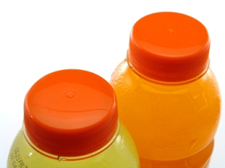 You know it’s important to drink lots of water before, during, and after a workout, but you might be forgetting something! During exercise, your body also loses electrolytes, and you need to replenish them for proper organ and cellular function. Common electrolytes include sodium, potassium chloride, and bicarbonate.

Sodium
Sodium regulates the total amount of water in the body and the transmission of sodium into and out of individual cells also plays a role in critical body functions. Many processes in the body, especially in the brain, nervous system, and muscles, require electrical signals for communication. The movement of sodium is critical in generation of these electrical signals.

Potassium
The proper level of potassium is essential for normal cell function. Among the many functions of potassium in the body are regulation of the heartbeat and the function of the muscles.

Chloride
Chloride is the major anion (negatively charged ion) found in the fluid outside of cells and in the blood. Chloride also plays a role in helping the body maintain a normal balance of fluids.

Bicarbonate
The bicarbonate ion acts as a buffer to maintain the normal levels of acidity (pH) in blood and other fluids in the body. Bicarbonate levels are measured to monitor the acidity of the blood and body fluids. The acidity is affected by foods or medications that we ingest and the function of the kidneys and lungs.

Next
Yoga Pose of the Month: Post Workout Stretches