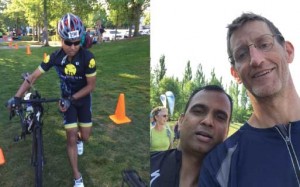 Aditya Pande came to Teresa Nelson and TN Multisports in December of 2015 being inspired by a local co-worker who we had helped complete Ironman Chattanooga. He wanted to do the same and quickly joined Seattle Athletic Club to work on his swimming.

At Aditya’s first lesson he was unable to make it from the wall to the flags (5 yards).  We called upon our super patient and technique driven instructor Nathan Palmer to help him out.  Aditya and Nathan met two to three times a week covering breathing techniques, floating, and eventually the full swim stroke. With learning anything new, he had good days and not so good days, but he stuck with it believing in his plan.

Aditya, also, was new to biking, having ridden a bike before, but still needed to learn clipping in and out, bike handling, and basic skills associated with riding on the road. He participated in our Lake Chelan bike camp in April, and several group rides throughout the year to conquer these skills. He learned to love riding!

Several months passed and although Aditya could swim we still had to conquer the swim in the lake and with a wetsuit.  Aditya began doing lessons in the open water, meeting with triathlon coaches Mark Webb and Dustin Gilbert, both avid SAC go-ers as well.  Although hesitant, he and Coach Teresa decided it was time to pull the plug and signed up for his first super-sprint triathlon at Lake Meridian.

Race day came and the gun went off for his 400-yard swim and panic set in.  He hung onto a kayak as several minutes passed. Nathan went to the race and with a little help from kayakers, they were able to encourage Aditya put his head down and get the swim done. He completed the three disciples of swim, bike and run in a little over 2 hours!

Three weeks later we decided to try another triathlon after a few more open water swims. His event was at Lake Stevens. This time, he finished the swim portion in half the time of his previous race and dropped 30 minutes off his previous race time. (Click here for the video)

Aditya refused to give up, showed up and made things happen day after day and week after week, for nearly a year!!!  You can learn a lot from this guy. You will continue to find Aditya in the pool perfecting his stroke, running to qualify for the Boston Marathon, and biking as he trains for his third major triathlon in California, the  Oceanside 70.3 in April 2017 which is quickly approaching!!!

Dustin, Mark, Nathan, Teresa and a team full of athletes were so excited to see Aditya achieve his goals. His commitment to the process is undeniably the reason for his success.  We are very proud of all Aditya has accomplished and wished him the best of luck as he continues to accomplish more and more!

Next
September Employee of the Month: Carmen Pieske