Guess what? Pilates is hard! But these guys keep coming back for more. 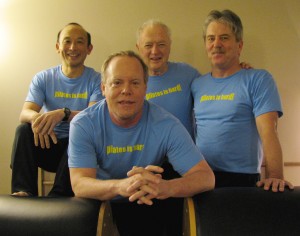 Rick started taking weekly private Pilates sessions because he was concerned about his posture and core strength. He periodically had back problems which he believes are primarily iliopsoas strains and quadratus lumborum tightness. He knows that core strength is critical to preventing such problems. In addition he has a family history of osteoarthritis and he feared that his poor posture and inflexibility set him up for similar problems. He had heard that Pilates was helpful for core strength, improving flexibility and posture and since he had a free hour class from the summer rewards program, he thought he would give it a try.

“I think Pilates has helped a great deal, though obviously it’s still a work in progress. My back problems have melted away, I can reach my toes on most days and I think I’m internalizing Danielle’s voice in my head to, “Scoop and open up your chest,” so that I’m much more mindful of my posture.”

There are a lot of things Rick enjoys about Pilates, including three major points;

Next
Pilates Exercise of the Month: Pull the Pedal Up or Elephant on the Wunda Chair